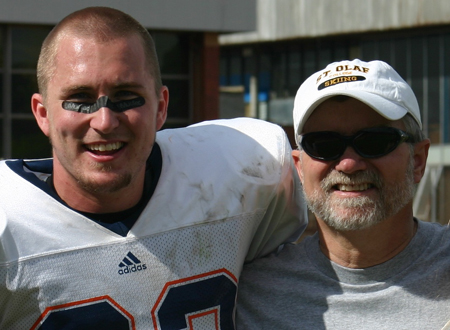 For most of my life I have known one “Head Coach Harrod.” His name is Doug, not Zach. Zach is the son of Doug. Doug has been the “Head Coach” most of my life and now tonight I will be the one Head Coach in the Harrod family, at least at the moment! Tonight is the first practice for the Junior team of the off-season. Tonight I’m no longer the “other guy” when it comes to coaches but “the guy.” To be honest, I’m a bit nervous and a bit reluctant. “Why?” I’m not sure, there are a lot of things swirling in my head. It could be because I’m nervous about my language ability. Or it could be because I really respect the man that was the coach over the last few years and I liked being an assistant to him. Those are two of the reasons. There are probably more, but I would ask for your prayers. Prayers that I would coach in a way that honors God and my guys. Coach in a way where my guys really wonder why I’m so different and they would realize that it’s more than just being an American. Please pray that I don’t sound too much like an idiot as I long to speak, and coach, only in Czech and not in English. Please pray that my guys would be receptive and respond well to the changes we are experiencing. More than anything, please pray that Jesus would be depended on greatly and lifted up in all of this! Thanks for being you! Grace…. …I will be out of Prague! “Where,” you wonder. Well, we, the Lions, have our preseason camp outside the city for the next 5 days! Four years ago, at this time I was getting on a bus with my teammates to travel several hours to Croatia. Sadly, we aren’t going to Croatia, but that isn’t too bad, because I don’t want to sit on a bus that long! We are heading north to a sport hotel up in the mountains from Saturday to Wednesday. This camp will be much different from the camp I went to 4 years ago. I’d ask that you be praying for me and my guys over the next 5 days! Please pray that it would be a great time for our team, which is really young and ‘green’, to connect and gel for this season. Please pray for great conversations as well! Also please pray for my hammy, it’s not quite a 100%, which does make me a bit nervous. Thanks for being you! Have a great weekend and I hope to take my camera to get some footage from this! Be a Revolution!

Ahoj! (Hello!) Well, we had our Lions Party last night and the two highlight videos I did quick for the team were shown, so now I can put them on the world wide web! Here you go! The first two are the senior highlight video, with the English version first and then the Czech version. The third video is the junior team video. It is also official and was announced to the team, and people at the party, that I will be the head coach of the junior team next year! Big… Keep the prayers coming for this! Thanks for stopping by today! 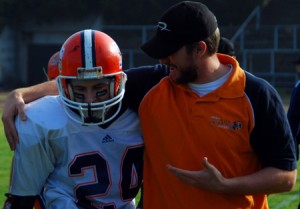 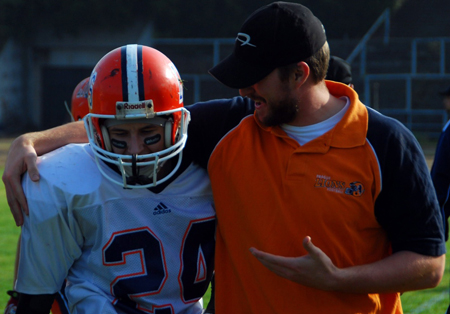 I love coaching. I certainly have a bit of my father in me (my dad has been a coach nearly twice as long as I’ve been alive!) and it comes out in many ways on the football field. Sometimes his fiery side that used to yell, “What in the world!” comes out and I have to walk to the opposite end of the coach’s box to keep my cool, but then there are the times that come out that I just teach, teach the game as I’ve watched for so many years, and watching it click in their minds. My dad is not just a coach but a teacher on the field and I’m thankful that it has been passed down to me. I also love that coaching is an avenue to share something deeper than the game of football with my guys over here. I’m always amazed to watch the faces of my guys when “it” clicks and it was done in a way where they weren’t belittled but encouraged. I love the pic, you see above, of Adam and myself! I think it sums up why I coach! Thank you to each of my guys and the Lions for giving me the opportunity to coach and love on you guys through the great sport of American football.


Click here and here to see some pics from our recent 62-8 victory. 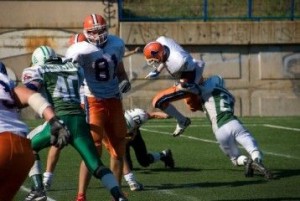 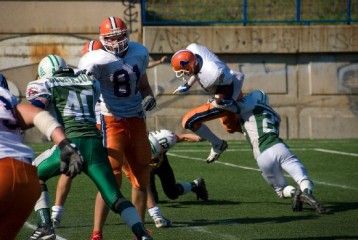 Junior season is in full tilt here and I’m loving coaching! It is actually cool, the more and more Czech I learn the to see how much more I love coaching these guys. Please pray that these young men wouldn’t just see an American that knows the game of football but that they would see a completely different way of coaching and living because of the the Person who has changed my life. I also have a great set up going now at home to watch football games (thanks to NFL gamepass) and this will mean being able to hang out at my place with a lot of these guys watching games and loving on them. Anyway, we won last weekend 48-0 and have a game against our rivals the Panthers tomorrow evening. For those of you who want to at least follow the scores, because lets face it, you won’t understand much of the text you could head over to the team website – lions.cz. In last weeks article I was even quoted – K tomu dodal asistent trenéra Zach Harrod: “Jsme spokojeni predevším hrou nováck?, kterí nás mile prekvapili” – to bad I said it to Honza in English! But I could have said it in Czech! The quote is about us being satisfied because we had lots of new guys and they also surprised us. Well, I’m off to enjoy a slower Saturday today…

Here is my attempt to rewrite my post, that mysteriously disappeared yesterday. So as you probably can imagine from the title, the Prague Lions, suffered a heartbreaking loss to our cross-town rivals, the Prague Panthers, in the championship game on Friday night. The final score was 24-14, which doesn’t sound too bad, but it felt more crushing than it sounds. I think most of my teammates, including myself, would agree that the word “mediocre” would some up our team performance, and many of our individual performances too, on Friday night. Which is sad, because this was the biggest Czech League Championship contested yet. I say this because the Panthers have reestablished themselves at the top of the league, but in our last meeting we nearly pulled out an upset. If we could have had another couple of minutes of regulation before going into overtime I think we could have one, but we lost in overtime. Secondly, we played in the beautiful new Slavia Football (soccer) Stadium, here is a quick video I found:

New Slavia Prague Football Stadium EDEN 8 – Awesome video clips here
It was great! We enjoyed a great field, big locker rooms, jumbo-trons and more. Sadly, we couldn’t put things together for the upset win, as I (we) was (were) anticipating.

I was among the first ones in the locker room and I was the last one out (which is the preferred non-superstitious custom I’ve had since high school). I guess, I dragged my feet getting out of there hoping that there might be a different result when I exited. Unfortunately, there wasn’t. Instead of joining my teammates, for what we had hoped would have been our celebration after the game, I went home to get some alone time (I spent yesterday laying low as well, I’m thankful that my director, Billy, and his wife, Adrianne, invited me up for burgers. It was great having human contact and playing with the kids.) at home. I, of course, had to call my father, who has also doubled as my coach and biggest fan for quite some time, and fill him in on the disappointing loss. He listened. And listened some more. And listened some more. Then responded with his famous line I’ve heard delivered after each of his teams’ hard losses – “Well the sun will come up tomorrow men!” Or in this case, “Son.” I then had an email waiting in my mailbox yesterday entitled, “The sun came up/time to move on for tomorrow.” Well said father… So we are starting to move on. My body didn’t adjust to playing again very well this season; so I will let it heal up as I evaluate things for next season. Thanks for the encouragements and prayers I received last week before the game. You are a blessing!

Giving Tuesday is upon us!  Over the last few weeks, we have tried to lay … END_OF_DOCUMENT_TOKEN_TO_BE_REPLACED

teamHARROD Advent Blessing 2019 from Zach Harrod on Vimeo. Over the last … END_OF_DOCUMENT_TOKEN_TO_BE_REPLACED

I was asked, “Why football?” During the start of our trip back and in my … END_OF_DOCUMENT_TOKEN_TO_BE_REPLACED