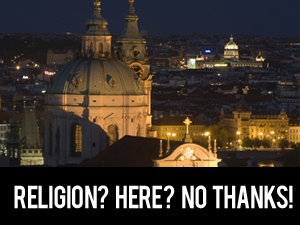 If you read my blog, with any regularity, I’m sure you have picked up on a theme about the spiritual climate of the Czech Republic – it claims to be one of the most atheistic countries in Europe, and even the world. Recently, I found a past link about the Czech Republic and religion that I found sad and interesting yet again. It was over at the ABC Prague blog, that I’ve blogged on in the past, but sadly it has gone quiet as of late. I thought this was worth blogging about as well, the post was Religion is not important for Czechs.

The Czech population belong to the five least religious nations in the world, it come from the research published by the Gallup company. Religion represents an important part of everyday life only for 21% of CR inhabitants. More unbelieving are only Norse with 20%, Danish with 18% and Swedish with 17% . Religion plays the lowest part in the life of the Estonians, where only 14% of the asked said it is important.

This research brought us the US company Gallup, they carried it out in 143 countries of the world. The most religious countries, on the contrary, are Egypt, Sri Lanka and Bangladesh. Those numbers are interesting, however from the point of view of an average Czech: If one comes to Moravia, which is the eastern part of the Czech Republic, there still might be some religious people, but in Prague, I personally met only two people who were active Christians in my entire life.

What I find interesting is that the countries they claim to be less religious than Czech – Norway, Denmark, Sweden and Estonia – all have something common about them? They are all in Europe! According to this poll the 5 least religious counties in the world are all European. I think that is a HUGE indicator about where things are in the world. I’ve said it before, that I think it can be argued that Europe may be the least reached continent in the world (see here also). I think this study from Gallup is further indication of this, but I do wonder how they conduct their studies, because 21% seems like an awfully high number for the percentage of Czechs, whom would say they are “religious.” It must be said, that even though the vast majority of people wouldn’t claim to be religious in any way, they, like all people, are deeply religious. It just isn’t directed to a deity, but to the presumed deities of self, beer, sex and/or the presumed identity of being one of, if not, the most atheistic countries in the world.

Sadly, the last sentence from the author of this post – about only meeting two active Christians in the whole city – is very accurate. Granted, being a Christian means I will know, and know of, many active Christians – both Czech and ex-pat. It’s still an interesting statement though. It makes me wonder. Wonder about the Church here in Prague. It makes me hurt – hurt for the author of ABC Prague, who has only met two “active Christians” in this whole city. Hurt for the many, many Czechs who might know a Christian, who might even be a ‘friend,’ who is a Christian and they may not even know it by word or deed of this Christian. Hurt that that church doesn’t seeming to be loving in word and deed in missional ways to this city. I hurt reading things like this, but I also pray, pray that God would break through it. Pray and long that God would stir the hearts of His people and they would turn to Him and in turn to Him they would be sent on mission, as missionaries, as every Christian is to be (John 20:21). I dream and long for the day that the Church of Prague, and Czech, would go out on mission from God. Some days would seem hopeless, but there is hope in the midst of it all – the resurrection and the empty tomb! I know you have heard it before, but I pray that it would never ever grow stale or boring to us! He, Jesus, conquered death, nothing would stop Him and His mission. So I pray and long in response to this Gallup poll and yet I also cling to the hope and promise of the truth of the empty tomb! Would you join me in praying and longing for this place? Would you join me in longing? Would you join me in pleading? Thank you!

Really? Is there? I didn’t know this was actually happening here in Czech. According to an article, Czech Muslims complaining about Islamophobia, from the Czech News Agency some would say it does exist. If you have, the time to read the whole article you will see that there is much debate about this and many disagree if it is or isn’t present. However, I have noticed more veiled women in the city than ever before, going back to my first summers spent here in ’02 and ’03 or to my 18 months in ’04 and ’05. It has been interesting to see. Immigration numbers are up, and that means other cultures and religions will be brought into the larger Czech context. Some Czechs are very skeptical about immigration and “outsiders” coming in (which is easy to understand from a historical point because this went for centuries here and it hardly ever produced positive results) and what that will do to their country. See one of the things that communism prevented here in Czech was immigration. Because of this, immigration, for the most part, is a fairly new thing here. Although there are periods of the history of the Czech lands, especially Prague, where the city was much more multi-cultural than even now (relatively speaking of course). This changing fairly quickly now and it has been interesting to see what has transpired. I don’t know what to think about this presumed Islamophobia, that may or may not be here. Here are a few quotes that I thought I would share with you, that really made me think:

“The situation of the growing hatred and xenophobia has escalated to such an extent that it is necessary to launch a national debate on the phenomenon,” Lukas Lhotjan from Libertas Independent Agency says.

Three-quarters of Czechs do not want to allow Muslims to build mosques in the Czech Republic although they have no negative experience with them. The reason is a mere prejudice that “is being fueled by the media,” the report says.

Judging from what is said in those quotes you can see why some are raising concern. Concern should be raised, but this is a very, very, dangerous discussion. On one hand you can see why there is concern because there are radicals, but on the other hand there are people who just want a better life than what they had so they immigrate to Europe to find that. Now there very well could be a fine line between to the two parties, or a very blurry line. This has been wrote about and spoke about much (click here for another post) and I even have 3 books on my shelf about it that I haven’t got to yet. It could be very scary in the years ahead, in that vein I read this:

If you ever wanted to see Paris or Rome before you die, but haven’t had a chance to do so, you might want to hurry. Soon enough, most of what we now think of as Western Europe will be transformed into a branch of the Muslim world, which is sure to make it an even less welcoming place for Americans, Israelis and for Jews. (read whole article)

That is concerning and you can see how these fears lead to things, ideas and actions throughout Europe. I think we must be mindful of this, but also we must see this as an opportunity! That is how I want to look at it. The Middle East is coming, and has come, to Europe. We can either foster harsh feelings towards them, or see this an opportunity to love and see Jesus do something much larger than we could imagine. Last fall, we had Josh McDowell come and spend an afternoon with our staff here, and in respects to the low European birthrates, the high birth rates amongst Muslim immigrants, and the growing secularism of Europe, he said the only thing for us to do, is do what we are doing – loving Christ and loving people. In the face of all this I will choose to love Christ and love people, and leave the rest up to Him to take care all of the details….

…THAT I DO HAVE FUN OUT THERE! I’ve never been short on intensity and … END_OF_DOCUMENT_TOKEN_TO_BE_REPLACED

“But seek the welfare of the city where I have sent you into exile, and … END_OF_DOCUMENT_TOKEN_TO_BE_REPLACED

Today was supposed to be our KICKOFF GAME.  Instead of coaching, I … END_OF_DOCUMENT_TOKEN_TO_BE_REPLACED