This fall I was talking about the depth of Christianity in comparison to what I see with modern Christianity sometimes that might be described as a certain amount of superficiality with a friend. I know ‘superficial’ is a strong word, but hear me out. When I open the Bible I see beautiful depth and what could even be described as beautiful paradoxes, but when I look at what would be called contemporary Christianity, the word that comes to mind is superficial or even something like placing the life of a Christian or God in neat and tidy box of sorts. Then I ask myself, “Is it this neat? This tidy? Because it would appear not to be both played out in the Bible and also played out in life in the midst of a sin wrecked world!” I have to confess, that I certainly add to this and by no means would I ever say I’m innocent of increasing the superficiality of Christianity, but it is things like this that rack my mind. I know, I know… Maybe I should direct all this pondering to something more worthwhile, but that is the point – it is worthwhile! Because my [our] faith should be all encompassing! So anyway… back to my friend. He told me that I should listen to a radio show from the guys over at White Horse Inn, entitled “Happy Clappy Worship.” He then went on to explain it to me, I was intrigued, but not intrigued enough to run home and find it on the net, but yesterday I did. So I’m wondering, what do you think? Give each of the 4 segments a listen and let me know. Agree or disagree? Before listening please take a deep breath and relax. I’m a little “iffy” if I should post this, but I’ve been thinking about things like this for awhile now, and not just in response to worship but all of Christianity, and I’d love to hear what you think about it too! It doesn’t matter whether you agree with me or not, I’d love to hear what you think and then still be friends on the other end! 😉 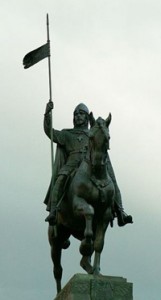 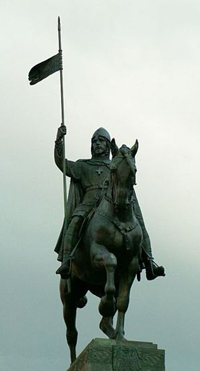 “Exercising Christian love and mercy and generosity to the poor, orphans and widows, priests, guests and travelers. Truthful in speech, fair in judgment, faithful to all which is entrusted to him, exceeding human limits in goodness. Never depriving anyone of anything through violence or trickery. Believing in God with all his heart, embodying goodness in all his life. Building churches in all castles and gathering God’s servants from abroad, introducing God’s worship as is customary in great nations. Spreading Christ’s message through good example, not by force.” -From a legend about King Wenceslas (Václav), as quoted from Czechs and Balances: a nation’s survival kit

I’m working on a talk/training/resourcing time we are doing for our STINTers/Volunteer next week, tentatively entitled “Cultural Landmarks and ‘Avenues’ to the Heart of Czechs“, and I found this quote in one of my favorite commentaries about Czech history, legends, and life. It is an amazing quote! Especially, when you consider that King Wenceslas is a major Czech hero and considered the patron saint of the Czech lands, come on the biggest square in the city is Václavské námestí (Wenceslas Square). So as I read and reread the quote on the tram home, I prayed that God would raise up Czechs in the same vain as this quote. Would you join me in praying for this? How beautiful of a picture does this quote paint? Well, imagine the Lord painting a much more brilliant picture if there were Czechs living this out boldly today! I love the church-plant hint that is in the quote too – “Building churches in all castles”! I guess, we aren’t building them in castles anymore, but it’s still there! May God increase His worship in this great nation! Thanks for stopping by, I’m off to bed!

“But seek the welfare of the city where I have sent you into exile, and … END_OF_DOCUMENT_TOKEN_TO_BE_REPLACED

Today was supposed to be our KICKOFF GAME.  Instead of coaching, I … END_OF_DOCUMENT_TOKEN_TO_BE_REPLACED

Giving Tuesday is upon us!  Over the last few weeks, we have tried to lay … END_OF_DOCUMENT_TOKEN_TO_BE_REPLACED

teamHARROD Advent Blessing 2019 from Zach Harrod on Vimeo. Over the last … END_OF_DOCUMENT_TOKEN_TO_BE_REPLACED