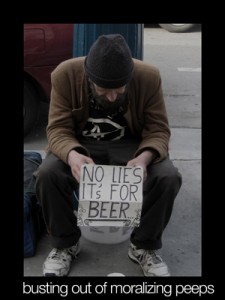 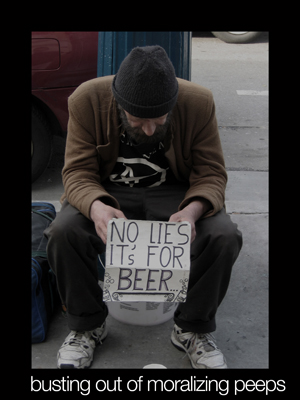 Quite some time ago, I read a post over at theresurgence.com , entitled The Liberated Puritan, which peaked my interest, but I never blogged on it and recently this week, for some reason I returned to it. I’m not sure why, but I think it was in my frustration as of late, with us (Christians) trying to moralize people!

“Moralize people Zach? What do you mean?” What I mean is this, we become so reactionary to the “so-called evils” of the culture and the world, we start trying to make the culture or people more moral! It’s as if we think, “Hmmm if I could get this person to stop drinking, or stop sleeping around, then they will be a better person and then the Gospel will make sense to them.” As I look through the pages of the Bible, specifically the New Testament, I don’t see this. I don’t see Jesus going around on moral crusades attempting to clean people up morally so they could enter the Kingdom of Heaven. I see Jesus, and his boys, moving within culture and peoples’ lives as they are and watching God change the hearts and then their actions follow. The examples of this would seem to be endless throughout the pages of Scripture. Take your pick! In every case of Jesus interacting with a moral “nobody,” so to speak, he comes to them, as they are. Then their interaction with Him changed the outworking of their life. It was never, “Change your sinful way, then I will come to you, and you will be good enough.”

Yet for some apparent reason, we, as Christians, continue to try to do this. Why? Why? Why? As you can tell, this makes me uber frustrated! Why can’t we love people as they are and bring a real Gospel to them that says, “You know what you, like me, are jacked up beyond what we can believe, and you can’t do anything on your own to clean yourself up, but my God says, ‘I love you anyway, and I’ll invade your world and give you the ability to break out of the rut you’ve been stuck in, through the life, death and resurrection of my very own son!” Can we get there? Or are we going to continue to push our morals on people who have absolutely no categories for them?

This brings me back to the post, The Liberated Puritan, it was interesting reading, because it breaks down the stereotype so many have against the puritans. It would appear he, Douglas Wilson, blows that up in looking at the earliest puritans who in his words had been slayed by the Gospel of grace and liberty not the Gospel of moralism and empty works!

How easily we forget! The potency of the Gospel is always seen best in what it does to old wineskins. Religious man, ethical man, always wants a certain kind of ecclesiastical doing and bustling about. This doing is always careful to color inside the lines, and to keep off the grass. But whenever the Gospel breaks forth in the church, slaying its thousands, one of the first casualties is simple moralism. In the Gospel of Christ, men are charged to repent of all their doings, and to be something other than what they are. This of course provokes the hostility of religious man because he is always in control of what he does, but only God can be sovereign over what a man is. The Gospel of grace is therefore obnoxious to such a man.

Hmmm… Strong words. There might be some disagreement with his words, but I see his words playing out in my life. See, before I left for college, I was the ethical/moral young man, who gazed down his nose at others who drank, smoke, fooled around with the opposite sex and more. College had (has) a way of undoing that to a degree, and I started to see myself slip away from my “moral self”, and it was in that season of life that the Gospel slayed me and I was free. However, something changed. As I became more and more entrenched into, what could be called, “The Christian Ghetto,” I found myself falling from the Gospel of grace and liberty and once again turning to a form of ‘baptized moralism.’ It’s this form of ‘baptized moralism’ that Wilson unpacks in the article. Generation, after generation something changed in the lives of the Puritans, they resorted to a mere moralism, which I can see happening in the life of a Christian within in a matter of a couple of years, not just a couple of generations.

…THAT I DO HAVE FUN OUT THERE! I’ve never been short on intensity and … END_OF_DOCUMENT_TOKEN_TO_BE_REPLACED

“But seek the welfare of the city where I have sent you into exile, and … END_OF_DOCUMENT_TOKEN_TO_BE_REPLACED

Today was supposed to be our KICKOFF GAME.  Instead of coaching, I … END_OF_DOCUMENT_TOKEN_TO_BE_REPLACED