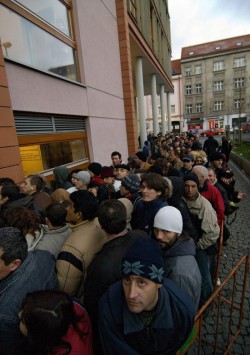 “Do you like it here?” asked the twenty something working on my visa at the infamous Foreigner’s Police here in Prague. (The pic you see comes from this article over at the Prague Post, have a read) I looked at her and tried to just say, “Yes,” and move on but it wasn’t happening. I responded with, what I thought, was charming smile, “I love it here, except days like this.” She smiled in agreement and then asked what the situation was like outside the Foreigner’s Police before they opened the doors. I thought to myself, “Billy [my director] told me not to say anything, be quiet Zach!” Yeah that didn’t happen, I told her two words sum it up, “crazy” and “chaos.”

Chaos at it’s finest too! I’m not down with what Charles Darwin spun off, but I can see what he meant by “survival of the fittest” as I yearly endure the Foreigner’s Police. It’s intriguing. I told Erin, that I wish I didn’t have to worry about anything else and just document the whole experience because it is indeed an unique social experiment of sorts. So at this point you are probably wondering two things, 1) Did you get your visa, and 2) What happened? Yes, Erin and I did get our visas renewed! Praise God, I’m thankful for that… As far as the story goes, that is a bit longer.

Erin and I showed up a little before 4 am to try to get a good jump start on the process. What we found was about 20 people sitting in the waiting room and some people milling about outside. No line had been started in front of the doors, where the line usually begins, and with delight Erin and situated ourselves for the 3 hour wait, but that delight ended quickly. One of the “unofficial” workers at the Foreigner’s Police started talking about a list that we had to get on and that the line started at the corner. Erin’s Czech is a year and half better than mine and she is pretty confident, I’m also getting more and more confident, which is good, but dangerous too. This “unofficial” worker then verbally tore into us for the next 2 hours asking us if we knew what the word “politeness” meant and ridiculing our country (England, sorry to my British friends, but he assumed we were British and we didn’t feel like fighting that one.) It was very apparent that this man was trying to be “helpful” (please sense the sarcasm here) and direct us, but for the most part we were the pebble in this man’s shoe this morning. It wasn’t because we wanted to be indigent with him, but we were not “buying,” literally, into his system. See this man, and couple of his comrades, are there nearly every day and start “a list” that they spin as being “the list.” Which it isn’t and Erin and I didn’t feel like we wanted to buy into it, nor was it right to buy into. Thus the two hours of the man verbally drilling us commenced. If it would have stayed here, verbal abuse, that would have been fine with us, we can handle it. But it didn’t…

When I was there last time, my first time, it went too smooth. They had 10+ police officers and there wasn’t any of the sketchy “you need to be on our list” stuff going down. Today, that wasn’t the case. A little after 5:30 am two police officers came out and it was clear they didn’t want anything to do with us, or their jobs. To sum it up quickly, Erin and I were wondering if we would just get thrown to the back of the line, if we would get a number to get in the door and if we should have got on the “fake list.” This is where it went from bad to worse… The line formed on the corner and we held our own at the beginning, where the police officer told us to wait, but the 50 other foreigners that were there were very angry with us, because we weren’t on “the list.” We tried to, patiently, tell them, “That a list didn’t exist and that we were doing what the police officer had told us to do, wait in line at the corner.” So the verbal abuse continued but this time from this large group. Again, if it was merely verbal abuse, Erin and I could deal with that, but it didn’t end there. They began pushing us, lightly at first, but as soon as the two police officers left it reached the point where it was very clear that they wanted to start a fight with me.

We tried to reason, reason didn’t work at all. We tried to ignore them, ignoring them didn’t work. At one point, Erin said, “Don’t make eye contact.” I calmly responded, “Erin if I don’t keep my eyes up I could get a fist to my fast and I’d like a chance to at least block it.” Shortly after I said that to Erin, sure enough, “BOOM!” I thought, “Did that happen? Did I just get punched in the ribs?” I see a small man, one of whom had been pushing me, pulling his fist back with a chester cat grin on his face, quickly disappearing into the crowd. Yeah, he just sucker punched me in the ribs! I couldn’t believe it. I was filled with confusion, sadness because I felt something less than human, and quite a bit of anger. I took a deep, deep breath and was thankful that Erin and I were there together. Because if she wasn’t there other situations might have played out, well maybe not but they played out in my mind…

The initial situation that played out was a little Indiana Jone: Temple of Doom action on this little man and his buddies that are paid by other foreigners to stand in line for them (It is these people that create the majority of the problems/injustices at the Foreigner’s Police and where the biggest injustices are felt. Sadly, they make money from this, because people will pay them. I could just rant about this, but I will hold it here.). So I wanted to go straight “Mola Rom” (I know, he was a bad guy, but I’m just being honest with you!) on these guys and rain down justice and vengeance, but alas I was reminded of words that I just preached from 1 Peter 3 two Sundays ago “about absorbing injustices for the sake of the Gospel.” You might ask, “How is not going straight medieval, or primeval, on these dudes, absorbing injustices for the Gospel?” Well, one of the the few things I know for certain is that God has called me here and wants me to lay my life down for the sake of the Czechs, and even the other foreigners that are creating injustices at the Foreigner’s Police, for, what appears, a long, long time. If I were to go all “Mola Ram” on these dudes, that would probably mean me thrown in jail and if that were to happen, kiss good-bye to any chance of getting a visa (These guys know this too, knowing this leads to them creating problems. They also know that is like in sports, the person that starts the fight doesn’t get called for the foul/penalty, but those who retaliate.). So I [we] took a deep breath and went from first and second to 101 and 102 in line!

But praise God! We have our visas! We walked out with them and had very pleasant experience with the women who served us today. I’m also was reminded in the midst of all of this, that I love this country and the people of this county so, so deeply, that I would take a hundred more punches from a little Russian man! Thanks for the prayers and thanks for reading this long post… Okay, I’m going to go back to bed again!

Giving Tuesday is upon us!  Over the last few weeks, we have tried to lay … END_OF_DOCUMENT_TOKEN_TO_BE_REPLACED

teamHARROD Advent Blessing 2019 from Zach Harrod on Vimeo. Over the last … END_OF_DOCUMENT_TOKEN_TO_BE_REPLACED

I was asked, “Why football?” During the start of our trip back and in my … END_OF_DOCUMENT_TOKEN_TO_BE_REPLACED