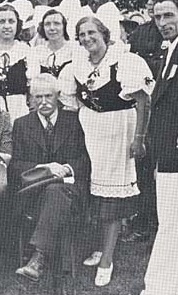 For those of you that know me, and have heard my presentation about ministry here, know my three overarching purposes with AIA here in Czech are:

That is what I dream of, pray for and labor towards. This week while reading Radio Praha I stumbled upon an article, The Jan Hus Church in New York – a remnant of the Upper East Side’s Czech past, about a church in New York name after the famous Czech Reformer, Jan Hus (learn more about Jan Hus). I enjoyed most of the article, but really enjoyed the portion about a Czech immigrant to America that served as the pastor at this church for some time. This week, he served as some inspiration for me and the thrid purpose I’m here in Czech – To see Czechs being sent into the world and reaching people of every tribe, tongue, and nation. This man’s name was Vincent Pisek and he was the pastor of Jan Hus Church in New York. Well, I’m not going to recount it all, here is an excerpt from the article about him:

In what sense was he amazing?

“Oh my goodness. He was a tireless worker, he went all over the country in the summers – he traveled all over the world, actually. He helped found churches all over the United States, in Czech communities, and helped nurture them along. He really cultivated the sense of Czech culture…with music, he was a great music fan and he really fostered that here.”

Vincent Pisek was indeed a remarkable man. He became pastor at only 23 and, as we’ve been hearing, remained in the post for nearly five decades. Part of his work involved finding ministers to send out to newly founded Czech parishes in the “Wild West”, while Pastor Pisek also helped set up various Slavic societies and organized missions to Serbia during World War I. He also undertook a dangerous trip to Siberia in 1919-1920 to offer encouragement to members of the Czechoslovak Legion there, many of whom had not been home for six years. The minister made an influential friend in Dale Carnegie, who contributed funds to the Jan Hus Church’s Neighborhood House.

Pastor Pisek died in 1930. The plaque in his honor on the front of the church reads: “His ministry of fifty years was the means of advancing the cause of Christian religion and good citizenship among the Czechoslovak people of New York and throughout the United States.”

So cool. He was sent out to Slavs all over the United States, and even the world, and I’m sure in his journeys he had many opportunities to love on many other people, beyond just Slavs. As I sat reading the article I couldn’t help but pray that God would raise up more Vincent Pisek to cultivate community, reach Czechs, and also take this same spirit all over the world. What a cool piece of encouragement. I was disappointed to read more about Pastor Pisek’s church today. For instance, this sentence, “In terms of our theology we have a very progressive theology, and we’d like to believe that the forward thinking and spirit of the Hussites is still here.” What? I’m not sure how Jan Hus would feel about this, because he was returning to what the Scripture had to say not, what they were dreaming up. It was just a reminder about how striving for progressiveness in the wrong areas – i.e. theology – is dangerous. That’s why I’m down with being “orthodox in theology but progressive in methodology.” Besides this, the article was a great encouragement for me and has me praying again for this place…

…THAT I DO HAVE FUN OUT THERE! I’ve never been short on intensity and … END_OF_DOCUMENT_TOKEN_TO_BE_REPLACED

“But seek the welfare of the city where I have sent you into exile, and … END_OF_DOCUMENT_TOKEN_TO_BE_REPLACED

Today was supposed to be our KICKOFF GAME.  Instead of coaching, I … END_OF_DOCUMENT_TOKEN_TO_BE_REPLACED