Well I finished up my two weeks of preaching at my church here in Prague, Faith Community. It went well. God showed up in some cool ways. I would like to write some follow up posts about conversations I had about the talks and also the content of the talks themselves. God really used both talks from 1 Corinthians 14 and 15 in HUGE ways in my own heart. It is always beautiful when you are teaching in a church and that content you are preaching you are just really preaching to yourself. So, so good. Well, before I get those other posts up (if I do) I wanted to share with you the benediction I used at the end of the talk. The benediction was adapted from Jeremiah 29:4-7 and 1 Corinthians 15:58 from The Message paraphrase and then it has a little Prague spin on it. I hope you enjoy it and that it causes you to love your city even more…

This is the Message from God, Israel’s God, to all the exiles I’ve taken from around the world to Prague:

With all this going, my dear, dear friends, stand your ground. And don’t hold back. Throw yourselves into the work of the Master, confident that nothing you do for him is a waste of time or effort.

…the resurrection that is. Here is a quote for us.

The resurrection addresses those who insist on protection and security of the individual, institutions and country. Such persons set up mechanisms of defense along economic, racial and national lines¦ In sharp contrast, the life of the Spirit, with its hope in the resurrection, does not, indeed, cannot, dwell on the preservation of the flesh (personhood, institution and nations). Rather the corporate life of the Christian becomes one of risk. A Christian hospital can accept more welfare patients than economically advisable because it knows God’s love for the poor does not depend on its continued existence. Christians can call for total disarmament in the midst of a cold war because they know the future of the world does not depend on the survival of the nation. A Christian can risk his or her life because a Christian knows this life is not the end. – Graydon Snyder

nough said… It burns a little doesn’t it? I hope it does, because it burns me a bit. Let it burn, sit in it! Let the truth of the resurrection change everything! 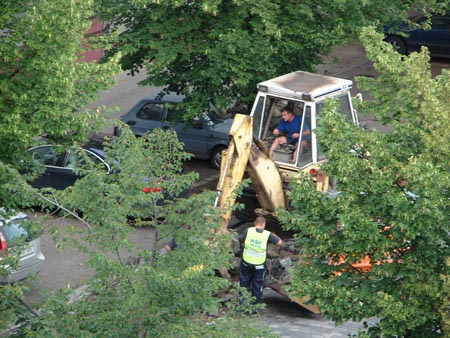 Why do you have to start road construction before 7 am? Why?

I don’t know what is better waking up to my annoying alarm clock or this? 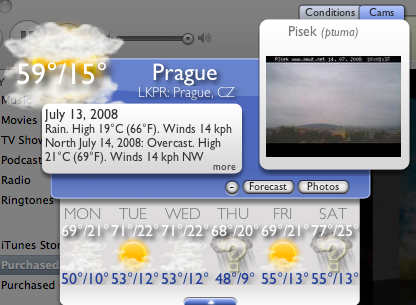 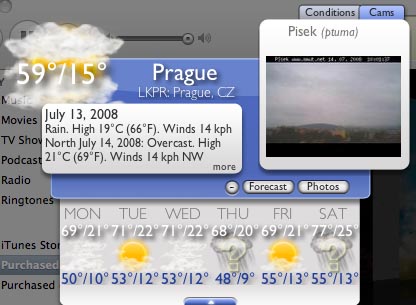 This was a screen capture of my weather widget at 10:15 this morning. Temp – 59 degrees! I know some may not like seeing a weather forecast like this, but below my Prague weather widget, I have one set for Chicago, the average temp for Chicago this week, above 90! I will take 60s and 70s over 90s and humidity any day! Oh the comfort…

Yesterday, I met with my Czech teacher, Lenka, and we had an interesting conversation that was very varied! Meaning we covered a wide range of topics for three hours, all in Czech! She gave me an article she copied for her class at the Charles’ University because it contained somethings that were topics in our class during the semester – Czech atheism and Czech women’s propensity to go topless at pools or in the park (like where I would normally run). Well, I found it in English to share with you! The author of the article, Police Tolerate Nudists at Swimming Pools, seems to link toplessness (or tolerance) with atheism:

“Czechs belong among the most tolerant nations in the world â€“ something that’s related to the high percentage of atheists here,” Petr Weiss, a sexologist, told iDNES.cz. “That’s why most people don’t care if a woman swims without her top. Only older people who are religious might be offended.”

Interesting… Can’t say I agree entirely, but it is none the less amusing and interesting to wonder if this has a correlation. I also like the “only older people who are religious might be offended” line. Assuming that only older people are religious and that is just a matter of religion or offense. Much can be said about this and I’ve actually been sitting an a post I haven’t finished yet, entitled An Open Memo to the Women of Prague. Maybe once I get this sermon behind me coming up on Sunday I will get this up. I have reason to now, I guess…

Prague isn’t known for being the cleanest of cities throughout Europe, which saddens me, because it is so beautiful in so many other ways. That is why this is exciting (from article, Ban on littering in Prague brings thousands in fines):

As of July 1 you can be fined up to CZK 30,000 for spitting out a chewing gum, not lifting your dog’s excrement or dropping a cigarette and other ways of littering.

Victory! People clean up after your dogs! Or else! I was so excited to read this and actually read that the police are enforcing it. Great! In reading about this on a few other sites, I found this hilarious ad from a couple of years back. It roughly says, “Like man, such is dog. Prague 5 thanks all polite people, who clean after their own dog.” Too funny… 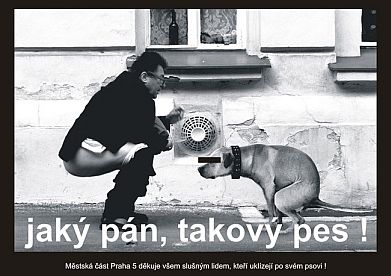 I like Vaclav Havel. I do. How can you not? I mean he was a major voice during the revolution and he was an Artist-Politician. I like that. However, I know not everyone in this country likes him, but when he chimes in on topics both dealing with Prague, culture, government, and/or Europe I really enjoy what he has to say. I won’t go into depth on it, but I wanted to share a portion of an article (Václav Havel regrets post-communist reform left unfinished) I read recently about his thoughts about life post-communism.

Havel does not hide his disappointment at ex-communist societies following the west in embracing globalisation and rampant consumerism, the interviewer, Stefan Wagstyl, writes.

“It is a two-faced trend: on the one hand it brings people thousands of advantages and joys and pleasures; on the other, it is endangering the human race,” he quotes Havel as saying.

Pointing to a mobile phone he says: “Fifty years ago, I wouldn’t have imagined this little device could be used to make calls all over the world, to make video recordings, and to send images. If someone had told me about this then, I would have thought the future world would be a wonderful one when people would have these things and would be able to communicate better. But that didn’t happen. The world today is worse, and it is full of more traps and contradictions than it was 50 years ago.”

In reaction to Wagstyl’s objection that at least in post-communist Central Europe the world is incomparably better than 50 years ago, Havel admits that it is good that the Iron Curtain has fallen and that Communism has ended.

“But that still doesn’t mean that the world is a better place,” he points out.

What I couldn’t help but think as I read the article is that Havel is longing for something more. Something better. The Kingdom that is aloof to many Czechs. As I was saying to a friend recently, when one political party replaces another or one system replaces another, that might be good, BUT it’s not enough. If the central person isn’t Jesus it will provide momentary change, but sure enough sooner or later people will be echoing Havel, “But that still doesn’t mean that the world is a better place.” This is a lesson many of us could stand to learn, especially in America, as we are all very hopeful about what a change in the White House, come the fall, could bring. Let’s be grounded – a new president won’t solve our problems, just as merely replacing communism hasn’t solved all of Czechs problems. It could be said that new problems surfaced, or they still may have some similar problems. Now I would, as almost every Czech would, take the problems of today over those of backward regime bent on it’s one power – that being the communists. Simply, may we look to Jesus for the deep lasting change!

I’ve mentioned my concern about the ridiculously low birth rates throughout Europe before, especially in relationship to the high birth rates of immigrants here. Well it would seem that in Czech we are having somewhat of a baby boom. One of the things I’ve noticed since moving back, 10 months, ago was the amount of pregnant women and baby carriages I see on the streets. It seemed way higher. Well sure enough, the birth rate is spiking a little here right now. I’m sure it isn’t enough to counter act the amount of elderly that will be passing away in the years ahead, but at least we are moving in the right direction. In fact, I read an article entitled Crowded Prague Maternity Hospitals Curb Admissions. What the heck does that mean? Well they are actually turning Moms-to-be away because of overcrowding! Here is what one of the hospital website’s had up on their site:

“We are warning mothers that until 6 January 2009 our capacity is full and for that reason we cannot admin any more mothers for the moment.”

Wow! So many pregnant moms and babies the hospitals can’t handle the sheer volume! Here are the actual statistics:

Childbirths in the country are steadily on the rise, reaching 114,500 in 2007. The total fertility rate rose to 1.44 children per woman in childbearing age.

Another article (Czech population reaches new high) I read points out that with the higher birthrate, and immigration, the Czech Republic has reached its highest population (10,349,372) since the end of the 1980’s. All this confirms my passion for being here in this city. The population is increasing, the economy is growing and Prague’s Europe-wide influence is growing. It is as I’ve said, “Reach the Heart, Reach the Whole!”

Oh this blog is ugly today! So very sorry… Help is in sight though! Clint over at difted.com is coming to my aid very soon! Thanks Clint!

I’m preaching this weekend at church, as our pastor has returned to the States for a couple of months to raise support and etc. We, as a church, have been trucking through 1 Corinthians and seemingly breakneck-speed, in a series called “1 Corinthians – An Urban Church Guide”. It’s been great, and we only have two weeks left. With that said, I love the opportunity to preach, but c. 14 of 1 Corinthians quite possibly will be the end of me. Not really, but it is a ton to work through. The simple fact that there are a lot of debatable items in this one chapter makes it so tough. Phil, my pastor, joked that his departure was strategic so he wouldn’t have to tackle this chapter. He was joking, but was he? I’ve been studying this chapter and it’s contents for the last 3 weeks in my personal study and the amount of content is more than a little overwhelming. But I love it. Having my nose in lots of books is good for my heart! Here is a little picture of what my desk looks like these days… Love it!

Giving Tuesday is upon us!  Over the last few weeks, we have tried to lay … END_OF_DOCUMENT_TOKEN_TO_BE_REPLACED

teamHARROD Advent Blessing 2019 from Zach Harrod on Vimeo. Over the last … END_OF_DOCUMENT_TOKEN_TO_BE_REPLACED

I was asked, “Why football?” During the start of our trip back and in my … END_OF_DOCUMENT_TOKEN_TO_BE_REPLACED