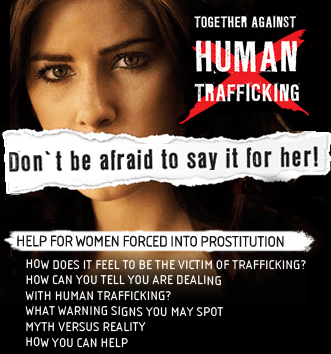 One of my friends here in Prague (Laura)posted about a new ad campaign that is popping up across the city. The campaign’s name is Say It (or in Czech, “Å˜ekni To”) and it’s a campaign to bring awareness and aid to women and individuals caught in Human Trafficking. Or to be honest in most cases Sex Trafficking. This has grown to be a burden of mine as I live and work in Czech, but most days I have no idea how to address this burden now as a single male. My dream one day is to pastor a church here with an active ministry reaching out and bringing justice to individuals caught in this. Here is an interesting and eye-opening portion from the website:

Human trafficking, in law often referred to as modern day slavery, is a worldwide problem. Generally speaking, it means dealing with people by different means of constraint (by force, pressure, deceit, etc.) in order to abuse them (e.g. in prostitution or forced labor). Victims of human trafficking are forced to perform various activities under appalling conditions, while another person generates substantial profits through them with almost zero outlay. Human trafficking is a serious violation of the human rights of the victim.

According to various international studies, each year from 700,000 up to 2 million people are trafficked, whereas in Europe it is from 300,000 up to 500,000 a year. It is estimated that the annual profit arising from human trafficking amounts to 8.5 up to 12 billion EURO. It is one of the most profitable forms of international organized crime, bringing its organizers profits comparable to the illegal sale of drugs or the arms trade. In the case of human trafficking, however, the risk of catching and punishing the offenders is far smaller, because they are able to exploit the dependent position of their victims, who are residing abroad illegally.

For more click HERE. May God bring freedom and justice to these victims and may the Bride of Christ, the Church, open her eyes to it and rise to the challenge!

…THAT I DO HAVE FUN OUT THERE! I’ve never been short on intensity and … END_OF_DOCUMENT_TOKEN_TO_BE_REPLACED

“But seek the welfare of the city where I have sent you into exile, and … END_OF_DOCUMENT_TOKEN_TO_BE_REPLACED

Today was supposed to be our KICKOFF GAME.  Instead of coaching, I … END_OF_DOCUMENT_TOKEN_TO_BE_REPLACED