Do you love your city? Do you long to see your city transformed for the glory of God and the good of the city? As I wrote in a previous post I’ve been getting drilled about loving the city and developing a Biblical Theology of the City and also loving the city as Christ loves the city. As of late I’ve been discipled from afar by Mark Driscoll out in Seattle as they are going through the Book of Nehemiah (click HERE to listen) and Tim Keller out in New York through some great articles at The Resurgence about the city (I’ve loved the new series that’s up – Ministry in the New Global Culture of Major City-Centers). But this discipleship has also hit a lot closer to home. Whether it be my friend Pastor Steve McCoy who has a blog dedicated to Living in Woodstock, IL or pastor friends like Joe Grier or Myron Bontrager who are actively working to restore the downtown areas of their cities through renovating old theaters. 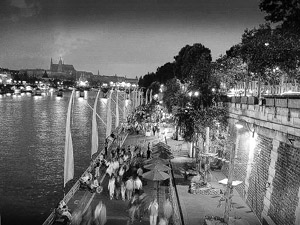 The question I’ve been asking is, How do you you want me to practically love Prague God? It’s a big city so there are lots of needs. One of the things that made me wonder is an article at the Prague Post entitled Making the Most of the Riverfront. I wondered what it would look like to get involved in a group of people that want to see Prague become a better place to live and actually do something to make it better not just complain about it. I’m not sure what it will look like but I’m praying about ways to live missionally within the city for the good of the city and for God’s glory. So I’m wondering – What are you doing to live missionally in your city? What are you doing to mix it up within it for it’s good and glory of God? Leave a response, help out the rest of us who are trying to do this thing called missional living….

Another interesting article about the city, Prague, and how its a sister city with Chicago! A New View: A cultural exchange with Chicago brings a compelling photo exhibit

…THAT I DO HAVE FUN OUT THERE! I’ve never been short on intensity and … END_OF_DOCUMENT_TOKEN_TO_BE_REPLACED

“But seek the welfare of the city where I have sent you into exile, and … END_OF_DOCUMENT_TOKEN_TO_BE_REPLACED

Today was supposed to be our KICKOFF GAME.  Instead of coaching, I … END_OF_DOCUMENT_TOKEN_TO_BE_REPLACED