So I promised that I would give you a recap about my trip to Cali and I told you to hold me to it. So here is a quick recap. If you click on any of the pictures below it will take you to my flickr site; note if you want to see any pics I put on-line just go to my flickr. Alright, here we go with the recap! Jason & Vangi Roeder and I met when they were living in Wisconsin and I was attending the Harvard of the Midwest (a.k.a. UW-OSHKOSH) for college. About a year and a half ago a friend and supporter reconnected Jason and I and after a year and a half things worked out for a trip. The purpose of the trip was two fold – 1) vacation, my Czech Director actually told me I needed to take at least one vacation of four consecutive days; 2) to connect with potential ministry partners who would be excited to join the many of us that are partnering together to reach the Czech Republic. Jason and Vangi were great hosts! Thank you guys! I also had a great time wrestling/playing/etc. with their four kids! When I wasn’t chilling at the Roeder house or having the occasional support appointment I got to get outside of San Jose a little. One day I hopped on the train and headed north to San Fransisco and bummed around Fisherman’s wharf and Alcatraz Island until the Roeder family joined me for some chili and clam chowder. I was bummed not to see and explore more of San Fran, but it was a great day! 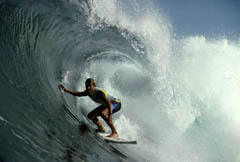 I also had the chance to go to Santa Cruz with a friend of Jason and Vangi, Brittany, who taught me how to surf! I wish that was a picture of me above but it isn’t! BUT the first chance to ride out a wave I rode it maybe 30-40 yards! That was the only success I had for the day! I did stand up briefly on another one and got wrecked by it! My highlight of the day wasn’t surfing though. It was running into a Czech while I surfed! Yes you heard that right! I met Jan (or Honza) as we were both learning how to surf that day! Jan and his girlfriend, Lucie, have spent the last few months working at Copper Mtn Ski Resort in Colorado and were traveling with Lucie’s parents around the West Coast and just happened to be in Santa Cruz the same day I was. It was a nice little reminder from God of my heart and call to, Lord-willing, labor for a life-time in Czech. Jan and I talked about Czech, Colorado, mutual friends, how Czechs are ALL atheists (according to him and its true nearly 90% of Czechs are), church, and more. It was such a blessing. I gave Jan and Lucie my card, I hope that we can connect this summer while I’m here in Colorado or back in Czech! We also drove up Interstate 1 for a little way and found a very, very cool place! It was a beach with a couple of caves, lots of rocks and it really reminded me of a scene from the movie, The Count of Monte Cristo. It was refreshing to just watch the waves crash along the rocks and take in the moment. I couldn’t help but think of God’s great strength as I took it all in. Psalm 65:5-7:

You answer us with awesome deeds of righteousness,
O God our Savior,
the hope of all the ends of the earth
and of the farthest seas,

who formed the mountains by your power,
having armed yourself with strength, I wrapped up my time in Cali with setting up a table about my work in Czech and preaching at Jason’s church, Saratoga Federated Church. I met some great people and I’m excited to see if God raises up some ministry partners from this very cool church. It was great meeting all of you at Saratoga Federated Church, thank you for blessing me with such a warm reception! It was also a blast speaking at Lifehouse, the high school ministry at SFC. I spoke once again on being a WORLD CHANGER and how God expects us to be WORLD CHANGERS but also gifts us with the power to be WORLD CHANGERS. The passage that we wrestled with came from Jesus’ last words to his boys before he ascended to the Father in Acts 1:

So when they met together, they asked him, “Lord, are you at this time going to restore the kingdom to Israel?”

He said to them: “It is not for you to know the times or dates the Father has set by his own authority. But you will receive power when the Holy Spirit comes on you; and you will be my witnesses in Jerusalem, and in all Judea and Samaria, and to the ends of the earth.”

After he said this, he was taken up before their very eyes, and a cloud hid him from their sight.

They were looking intently up into the sky as he was going, when suddenly two men dressed in white stood beside them. “Men of Galilee,” they said, “why do you stand here looking into the sky? This same Jesus, who has been taken from you into heaven, will come back in the same way you have seen him go into heaven.” (vv. 6-11)

It was a blast to see the kids respond, please pray with me that God would use that talk to spur these kids to be WORLD CHANGERS in the world where God has them now and also the world outside Cali! After I preached Jason was moved to challenge the whole group to join in supporting me on a monthly basis and a ton of the kids raised their hands saying they were excited to be part of that! So cool! THANKS GUYS! If you would like to hear the whole talk you can listen to it when I did it back in November in iTunes or HERE. It was a great trip. I’m thankful that God hooked it all up. Thanks again to all the great people I met while I was out there! Okay, I’m out…

…THAT I DO HAVE FUN OUT THERE! I’ve never been short on intensity and … END_OF_DOCUMENT_TOKEN_TO_BE_REPLACED

“But seek the welfare of the city where I have sent you into exile, and … END_OF_DOCUMENT_TOKEN_TO_BE_REPLACED

Today was supposed to be our KICKOFF GAME.  Instead of coaching, I … END_OF_DOCUMENT_TOKEN_TO_BE_REPLACED