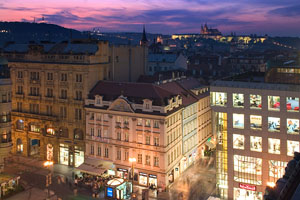 I’ve been driving all over the state of Wisconsin for the last few days working on connecting with ministry partners and also developing some new support. I’m catching a few moments with the family before heading back to Ohio for our last 6 weeks of the school year. It will be a full few weeks and I’m excited to see what God does. But anyway, I thought I would post some, always interesting, thoughts about Prague and the Czech Republic as I’ve read the Prague Post this evening. I just finished reading a recent story entitled City tourism goes for a makeover and found myself asking, “Is that what it will take?”

Is that what it will take to do what? As the article finishes it discusses improving the image of the city and it will take to do that. The author mentions that programs, training sessions and English lessons have been offered to improve the city’s reputation, but I think the solution is much different than mere language lessons or programs. The question is, “Can a society that has successfully, or at least how it appears, removed God from the marketplace of ideas change by mere programs?” I think it goes much deeper than that and thus why I dream of ministering to the Czech people for years to come. Here is a portion of the article:

Improving the cityâ€™s reputation will also be key to bringing tourists back, Okamura believes.

This all adds up to one unfortunate conclusion, Okamura says: â€œWe are not a kind destination, simply put. The behavior of people is the main problem, and the level of service.â€

Using funds from the European Union, the Czech Economic Chamber is attempting to clean up that reputation. A program it launched last February brings together employees from the tourism sector â€” travel agents, hotel workers and state bureaucrats â€” with police officers to be trained on being more tourist-friendly. Training includes learning basic English and German. So far, about 700 participants â€” 175 of whom are police officers â€” have completed the training, says VladimÃ­r Å iska, secretary of the chamber.

Pragueâ€™s British Embassy also saw the need for better tourist services, which is why it began funding free English lessons for city police last March. Since then, more than 100 officers have taken the classes.

The project was spurred by the complaints of British tourists who said police were unable to help them in emergency situations. â€œWe get people from time to time who tell us the attitude of the police has, shall we say, left something to be desired,â€ says Peter Wickenden, head of the embassyâ€™s press office.

…THAT I DO HAVE FUN OUT THERE! I’ve never been short on intensity and … END_OF_DOCUMENT_TOKEN_TO_BE_REPLACED

“But seek the welfare of the city where I have sent you into exile, and … END_OF_DOCUMENT_TOKEN_TO_BE_REPLACED

Today was supposed to be our KICKOFF GAME.  Instead of coaching, I … END_OF_DOCUMENT_TOKEN_TO_BE_REPLACED