Yesterday, I came home to a little love from the Twin Cities, this is what I got, 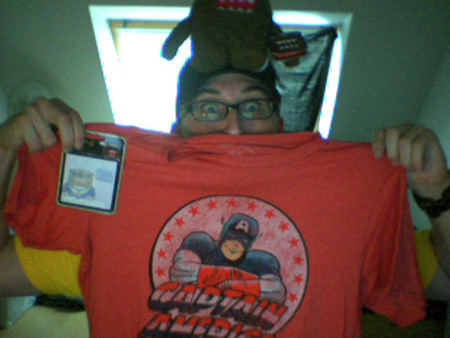 My lovely sister, Megan, surprised me with a new Captain America vintage looking tee, more Domo stuff (sticky notes to be exact). I still don’t know what Domo is. My sister sent me this 5 inch tall Domo (See Domo sitting on my head in the pic) stuffed animal of sorts, is it an animal? I’m not sure what it is… But anyway she sent it to me for my birthday and now, I have Domo sticky notes. What is Domo? Domo came with a name tag, and I followed his web address – www.domonation.com – but that didn’t help me much. This is what wiki says,

The name “Domo” was acquired during the second episode of his show in which a TV announcer said, “doumo, konnichiwa”, which is a formal greeting meaning something along the lines of, “Well, hello there!”, but which can also be interpreted as “Hello, Domo!”, and thus is a convenient dajare. The kun suffix on “Domo-kun,” the name used to describe the character in the Japanese versions, is a Japanese honorific often used with young males.

Domo, the main character, is described as “a strange creature that hatched from an egg.” Domo’s favorite food is Japanese-style meat and potato stew, and he has a strong dislike for apples, due to an unexplained mystery in his DNA. Domo-kun is known to pass gas repeatedly when nervous or upset.

Um…. It’s Japanese I guess? He (it?) lives in a cave… I’m so confused. Well, either way I laughed and I love the tee, I rocked it today, as a matter of fact! Thank you sis! It was a sweet, sweet blessing…

…THAT I DO HAVE FUN OUT THERE! I’ve never been short on intensity and … END_OF_DOCUMENT_TOKEN_TO_BE_REPLACED

“But seek the welfare of the city where I have sent you into exile, and … END_OF_DOCUMENT_TOKEN_TO_BE_REPLACED

Today was supposed to be our KICKOFF GAME.  Instead of coaching, I … END_OF_DOCUMENT_TOKEN_TO_BE_REPLACED