As I mentioned in an earlier post, last weekend we had our AIA Czech Planning Retreat/
Conference/Weekend (I’m not quite sure of what to call it), and it was a FULL weekend. We talked vision, purpose, mission, planning, schedules, personality profiles (I’m a super-high D, in the disc deal.), and much more. It was a good weekend, even though it was so full. To be honest, we could have used a full week for this all, because we tried to sink our teeth into some pretty meaty things. It was also great to get outside of Prague and into “the nature,” as Czechs say. This country’s beauty is so amazing to me. Here is a morning view from my window at the hotel. I also enjoyed and found the soap they had for us rather amusing! Nothing like a little Romance Soap! Don’t ask, I really don’t know what this was about, but it was funny! Anyway, I did want to blog about something that I has been haunting my thoughts all week! That is, What is a Spiritual Movement? What marks a Spiritual movement? I ask this, because Campus Crusade’s (the org I work for) mantra is now, “Helping Grow Spirit-Led Jesus Movements Everywhere – So That Everyone Knows Someone Who Knows Jesus.” Part of the problem, is that there hasn’t been a nailed down definition that I have heard, and I kind of feel uncomfortable thinking of there being a “nailed down” definition. I think that the term “spiritual movement” and what it looks like is very much organic and dependent upon where people are. For instance, the definition and out-working of this will look very different in Oshkosh, WI than in Prague, Czech Republic. Do we use the same definition there as we do here? I don’t think so.


This evolved into a big discussion during our meeting because I would say there is a Spiritual Movement taking place amongst the Prague Lions (the American football team I play and coach for), but it isn’t marked (YET) by two words – “evangelism” and “discipleship.” Now these two things are happening, but not on a wide scale and certainly not with a cute-defined bow tied on them. This is what I am seeing: 1) Guys open and talking about God, Jesus and/or spiritual things with each other and with me; 2) Guys praying to God even though they are not yet believers, on their own!; and 3) Guys approaching me and saying things about Jesus, God and etc. (Perfect example – last night at practice we watched a mean storm roll in and guys were saying, “Jesus is coming! It’s the end!” Things like this have happened on many occasions this year.). Now there isn’t a necessarily defined evangelism and discipleship movement going on, but there, in my opinion, is movement! God is stirring something is happening. Guys are talking. Guys are praying. Guys are bringing God up without me initiating it. MOVEMENT! But is this a Spiritual Movement? As we were talking, I drew this: 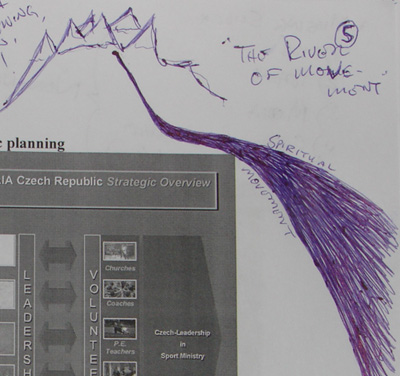 
This is what has been consuming extra thought over the last few days. My mind wanders to trying to answer these questions. It might seem like methodological or philosophical banter but it matters. It matters, because it defines our mission here. What does it look like living missionally as “insiders” amongst the sports world and the sports university here in Prague? This question is partly answered by answering these questions about the River of Spiritual Movement. What are your thoughts? Can you bring some clarity? Or maybe you can bring some better questions to the table. Let me hear it! I’m off to the grocery store….

…THAT I DO HAVE FUN OUT THERE! I’ve never been short on intensity and … END_OF_DOCUMENT_TOKEN_TO_BE_REPLACED

“But seek the welfare of the city where I have sent you into exile, and … END_OF_DOCUMENT_TOKEN_TO_BE_REPLACED

Today was supposed to be our KICKOFF GAME.  Instead of coaching, I … END_OF_DOCUMENT_TOKEN_TO_BE_REPLACED