This morning I’ve enjoyed my morning coffee and NFL.com. I have a confession; “I’m still a bit of a bitter Bears’ fan.” So reading and watching the highlights and interviews of the New England Patriots’ undefeated season was welcomed. I’ve been pulling for them down the stretch hoping they would pull it off. “Why?” you ask. Well, I’ve been a closet Patriots’ fan since Brady showed up in 2001, but that isn’t the real reason. I’m also (despite the whole video thing this season) a fan of Bill Belichick and the mastery of his coaching, but that isn’t it. The real reason I’m happy about the Patriots’ undefeated season is because of the 1972 Dolphins.

I’ll be honest I’m tired of them and their sheer arrogance. Every year when a team is undefeated and rolling throughout the regular season these guys 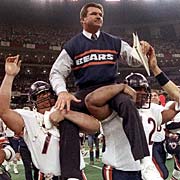 surface at games and root against the team that is chasing history. My angst isn’t just from watching this year in and year out, but probably back to the earliest of my football memories. This gets back to the “Bitter Bears’ Fan” part. The magical season known as the ’85 season is my earliest memory of my team. I was crushed when the Bears couldn’t answer the bell and fell to the Dolphins, but what burned me even more as 5-year-old was seeing these old guys cheering for my team to loose so they could still claim, “We are the best team ever, look at the record.” However, I still believe that if you were to line the ’85 Bears up against the ’72 Dolphins it wouldn’t be a game! In the words and voices of the Super Fans, “1985 Bears 121, [dramatic pause] the 1972 Dolphins -3. Yeah -3, the Bears’ defense would simply scare a -3 points out of them during the opening introduction.” Anyway, I’ve always been bothered by this “1972 Dolphin Team Phenomenon.” Why? 1) Records are meant to be broken; and 2) Talk about classless; cheering for teams to loose so you can gloat!

So I raise my 16 oz. mug of Starbucks’ Italian Roast to the ’07 New England Patriots for their season and here’s to another Super Bowl! Okay I have to go pray and confess my bitterness over this ridiculous thing to the Lord! For those of you that aren’t too fired up about football, I apologize about such a heavy football post! Have a great day!
Have you thought about supporting me?
Consider Giving

…THAT I DO HAVE FUN OUT THERE! I’ve never been short on intensity and … END_OF_DOCUMENT_TOKEN_TO_BE_REPLACED

“But seek the welfare of the city where I have sent you into exile, and … END_OF_DOCUMENT_TOKEN_TO_BE_REPLACED

Today was supposed to be our KICKOFF GAME.  Instead of coaching, I … END_OF_DOCUMENT_TOKEN_TO_BE_REPLACED