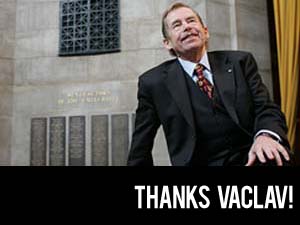 I’ve said it before, I like former Czech president, Vaclav Havel. I’m not going to lie, I think the man is intriguing. Do I agree with everything he says, or has said, or does, or has done? Absolutely not! He is indeed a broken and imperfect man, like myself, but the man still intrigues me. Some time ago I shared some quotes and thoughts from Havel on Life Post-Communism and recently, courtesy of Bloomberg.com, we have some more thoughts from him. Last week I read an article over at Bloomberg.com, entitled, Havel Laments Czech Future as ‘Consumer Palaces’ Occupy Nation and I was once again intrigued and even encouraged by Havel.

palaces and the new cathedrals

Czechs are building “palaces of consumerism” that will occupy a third of the country in the next two decades, politicians can’t see farther than the next opinion poll and mobsters and money-changers have become the new economic elite, Havel said in an interview yesterday.

“Not many of us thought the door would be opened so quickly to all the mafiosi and back-street money-changers” who have now become “millionaires and billionaires,” he said. “We are living in the first truly atheistic society, and there’s no feeling that there is any kind of moral anchor.”

First off, it must be said, that in much of my reading and study of Czech history, that the cathedrals that you see all over the city of Prague or the country, for the most part were never full, but they served more as political statements of the ruling party, the Habsburgs (whom were Catholics), against Bohemian protestants. With that said, I won’t say that the malls have become the ‘new’ cathedrals replacing the actual cathedrals of this country, but I will say in many ways, Havel’s statement of “palaces of consumerism” is very true. I would even argue that, for the most part, these are the new cathedrals of Czech. They are places, where Czechs now find their identity, their meaning and more, and as the article says they are spreading and consuming the country at a frantic rate. This makes me wonder how the Gospel must be contextualized into this new trend.

It brings me back to something I’ve heard Keller say and I shared with our project this summer. A better way to communicate the need for the Gospel (sin), is in terms of idolatry. (Click here for a pdf from the Gospel Coalition from Keller on Idolatry in a Postmodern Age.) The essence of sin is idolatry when we elevate a good thing (a created) thing to an ultimate thing and thus we worship it. These new ‘palaces of consumerism’ that are taking over this country have been elevated to an ultimate thing, and at the end of the day they will leave the Czech people, and myself, left wanting.

How could I not find it intriguing when Havel said, “We are living in the first truly atheistic society” that lacks any moral foundation. Some might be critical of what ‘religion’ has done to the world, and I would agree. In the name of ‘religion’ or ‘God’ horrible things have been done and I lament over those many things, but something must be said of a culture that lacks “any kind of moral anchor.” When this happens, you see the things that Havel laments over – corruption, greed, lying and more. So my question to my Czech friends, or critics of ‘religion,’ is, “How is it working?” (NOTE: I say ‘religion’ because personally, I’m not fan of religion. Religion is man’s efforts to get to God to appease something above through doing so I will get out of this or that. I’m not down with that. I’m in a relationship with a God who has done what is needed, and in response to his doing, I give him myself.) I don’t ask this smugly, but brokenly, with a longing to see people here turn to something greater than the gods of consumerism, or even a presumed freedom of sorts (yes, even freedom, which is a ‘good thing’ can be elevated to an ultimate thing!). Is it working? And if it isn’t working, what must be done? Is there anything? I would not have relocated my whole life here if I did not believe in the depths of my soul that there is an alternative to all this!

“When you have a beautiful table, or a piece of furniture, it can be kicked to bits in half a minute, but it takes weeks, months, to put it all together again,” Havel said.

It’s from this quote that I received much encouragement! Yes, Havel is referring to political change, and to a degree cultural change, but I can take heart in this quote. “Why?” Because it would seem as of late that I’ve been struggling with how hard it is to do “my job” or “work” here. In the midst of life – seeing people leave, being discouraged by not seeing results like I (we) would like to see, the difficulty of learning the language and more – I have felt discouragement creep in because ‘things’ don’t happen here on my ‘American timetable.’ I forget that it “takes weeks, months, to put it all together” and want to do it in a weekend. I was encouraged by this analogy, for this reason. It would be easy to tear the table apart or just throw it away because it would take too much time, or I could roll up my sleeves, get out my sander and other tools and go to work, realizing that it won’t happen in a day or a weekend but weeks or months – i.e. seeing lasting change here in this place isn’t going to happen in a short-term trip, or in a year of STINT, but years invested deeply, where I continue to trust God and roll up my sleeves, grab the lunch box and go to work.

…THAT I DO HAVE FUN OUT THERE! I’ve never been short on intensity and … END_OF_DOCUMENT_TOKEN_TO_BE_REPLACED

“But seek the welfare of the city where I have sent you into exile, and … END_OF_DOCUMENT_TOKEN_TO_BE_REPLACED

Today was supposed to be our KICKOFF GAME.  Instead of coaching, I … END_OF_DOCUMENT_TOKEN_TO_BE_REPLACED