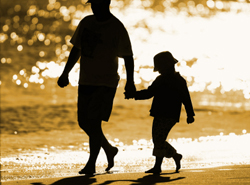 Over the last year or so, I’ve posted several times on the frighteningly low birth rates in Europe and here in Czech (click here for pasts). This week I read another interesting article, One third of Czech children now born out of wedlock, that threw another layer on top of this discussion – where’s the daddies? It was eye opening to read this, but then again it wasn’t because marriage numbers are on the decline and co-habitation numbers are climbing gradually. If you put these two things together, it would equal children being born out of wedlock. Here are the numbers, from the article:

In the Czech Republic, 39,674 children were born out of wedlock in 2007, which accounted for 34.5 percent of all the children born in that year. Our institute has been monitoring the numbers of extramarital-born children continuously since 1919; in the 1920s and 1930s, around 12 percent of children were born outside marriage, while in the period of 1938 – 1990, their numbers ranged between four and ten percent. At the end of the 1980s, the share of children born out of wedlock began to rise, and this tendency has been persistent ever since.

This should not surprise us though. As communism force fed godlessness down the people’s throats, but still imposed a pretty strict “some what” moralistic code (except for themselves, the leaders, of course). Once communism fell and that moralistic code (which consisted of more “traditional” things – i.e. marriage) was lifted to a degree as “freedom” rolled in accompanied with consumerism and fighting to get more and more money, there was a huge shift here. Things like marriage are not valued nearly as highly as in the past, but that isn’t unique to Czech. It’s happened all over the Western World. I truly believe with the rising tide of godlessness (that stills exists, even post-communism) and secularization of Europe this will continue to become worse and worse.

Due to this, it makes me want to pray, pray, pray that God would move here in Czech and throughout Europe. What can change this “problem?” I don’t think it will come from government programs, set up to give major incentives to couples who have children. There are countries all over Europe realizing there is a huge problem and not enough kids so they are rewarding people with pretty impressive incentives (read an article from the Washington Post about this in German and elsewhere, or here is another once entitled, Paying Women to Have Children). For instance, one of my dear friends over the last year, that I studied Czech with, was here for a year because his country gave him paternity leave, and paid up to 80% of his salary for a year! Now I’m thankful this exists there, because it enabled me to meet this friend, but I’ve wondered will programs like these really work? Or is there something else? Is there a better answer to the dangerously low birth rates throughout Europe? Here is another interesting quote from the article about the current Czech rate in relationship to Europe’s numbers.

For the future, Czech fertility is at risk of being even lower than today because in the past, it was women with basic education who had the highest average number of children. And because today, around 60 percent of those women have children out of wedlock, those women will not have more children. This phenomenon might in the future decrease the overall fertility level in the Czech Republic. Today, we have 1.4 – which is below the European average – and my guess is that this could be between 1.2 and 1.3.

As I’ve read many articles and followed this as of late, I couldn’t help but be concerned. See the “magic number” we need to see is 2.1 children born and as you can see Czech, and Europe as a whole, are well below that. What will this mean? How will the immigrants to these countries effect things? What needs to be done? There are so many questions, but one thing I know for sure, there needs to be an awakening in this city, in this country, and on this continent to really see lasting change. The governments try and try and try, but I’m nearly convinced that these programs will not, on a long term basis, produce the change they are actually going for. I think the change they are going for rest in Someone that can bring true lasting change, and I will labor here to that extent…

…THAT I DO HAVE FUN OUT THERE! I’ve never been short on intensity and … END_OF_DOCUMENT_TOKEN_TO_BE_REPLACED

“But seek the welfare of the city where I have sent you into exile, and … END_OF_DOCUMENT_TOKEN_TO_BE_REPLACED

Today was supposed to be our KICKOFF GAME.  Instead of coaching, I … END_OF_DOCUMENT_TOKEN_TO_BE_REPLACED