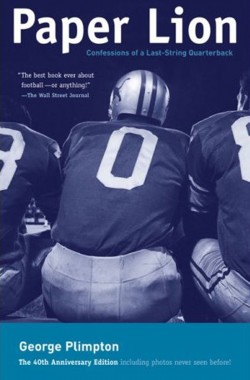 A very new phenomenon for me took place this week, and I guess has been taking place. The Lions have a reporter, Dave Faries, from the Prague Post (the main English print paper in town) working out and training with us and writing a series in the vein of a book entitled Paper Lion. Here is a quick run down of the series Dave is writing and the book that inspired him:

In 1963, at the age of 36, American sportswriter George Plimpton joined the Detroit Lions football team in training camp, ostensibly to try out for a position as third-string quarterback. The resulting bestseller, Paper Lion, chronicled the misadventures of an average man competing against some of the finest, most fearsome athletes of the day â€” guys like Alex Karras and Dick â€œNight Trainâ€ Lane â€” through the punishing National Football League pre-season.

Plimptonâ€™s book has become a classic of participatory journalism. It was turned into a film that was recently released on DVD.

Inspired by Plimptonâ€™s example and the upcoming CLAF (Czech League of American Football) season, Prague Post writer Dave Faries is working out with the Prague Lions in pre-season training with the same goal in mind â€” winning a spot on the team as third-string quarterback.

So Dave’s first article in the series was released this week. I enjoyed the article, but I will be honest it has been different for me having someone in on every practice, knowing that he is chronicling his journey, our journey and what he sees. Because let’s face it, there are ups and downs and when you get 20-30 guys together you never know what will happen. This week was especially interesting as tempers heated up a bit and there were some distractions of sorts as we were working on getting faster, quicker and etc. But all-in-all, I am so excited to have Dave with the Lions! I’m excited to see how this will help us as a team and also how it will help football as a whole here. Dave has a great heart to see us, that if football as a whole, thrive here, like it does in Germany or Austria. Dave and I are hopefully meeting this week. Please pray that God would use this to make His name great and continue to help me pursue my vision of why I’m here, that is to, “Transform American football in the Czech Republic for the glory of God and the good of the Czech people!” I’m sure Dave would appreciate your prayers too for his body too! I know he has been working hard and Ibuprofen has been his best friend as of late! CLICK HERE to read the first installment of Dave’s Paper Lion story!

…THAT I DO HAVE FUN OUT THERE! I’ve never been short on intensity and … END_OF_DOCUMENT_TOKEN_TO_BE_REPLACED

“But seek the welfare of the city where I have sent you into exile, and … END_OF_DOCUMENT_TOKEN_TO_BE_REPLACED

Today was supposed to be our KICKOFF GAME.  Instead of coaching, I … END_OF_DOCUMENT_TOKEN_TO_BE_REPLACED