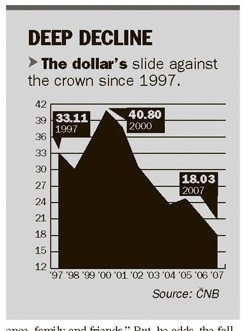 That is the dollar is free falling! Recently the Prague Post ran an article entitled Free Fall and being an adventure sport junky I was hoping it was about skydiving not the American currency that I get paid in. It was no news to me. As everyday when I go to class I pick up the free newspapers they have every morning here and I’ve watch it go from around 20 crowns to 17 crowns to the dollar in just three short months. It might not sound like a lot, but when I came to Czech my first summer in 2002 it was just under 40 crowns to the dollar. That short fall of 3 crowns has meant my rent has gone up $100 since I moved here, and I have a fixed rent for the next 3 years! So my landlord hasn’t raised my rent, but the weak dollar has caused me to have to withdraw more each month to pay for the rent. Plain and simple the dollar is hurting many Americans living abroad. Here is a quote from the Post article that was interesting and very true:

â€œThe Czech crown is especially strong, but right now youâ€™d be hard-pressed to find any currency that hasnâ€™t grown substantially against the dollar,â€ says William D. Harter, president of the Association of Americans Resident Overseas. â€œFor those people living abroad who have a dollar-based income, itâ€™s been very painful.â€

I just hope that the dollar turns the corner sooner than later and regains some of it’s strength abroad, or many of us missionaries will have to return to the States to reraise support sooner than expected.

…THAT I DO HAVE FUN OUT THERE! I’ve never been short on intensity and … END_OF_DOCUMENT_TOKEN_TO_BE_REPLACED

“But seek the welfare of the city where I have sent you into exile, and … END_OF_DOCUMENT_TOKEN_TO_BE_REPLACED

Today was supposed to be our KICKOFF GAME.  Instead of coaching, I … END_OF_DOCUMENT_TOKEN_TO_BE_REPLACED