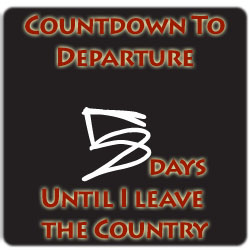 Prayer request for 5 days out from departure – Learning the Language. It is said that Czech is one of the most difficult languages in the world for American English speakers to learn, they are right! Please pray that as I get back and begin an intensive language school (I start the 10th, just six days after I get there) that God would show much favor and allow me to get the most out of this school. I’m not asking for an easy time, actually I know it will help in my sanctification process if its tough and I welcome that. I can’t help but think of Jesus’ disciples at Pentecost:

And they were all filled with the Holy Spirit and began to speak in other tongues as the Spirit gave them utterance. Now there were dwelling in Jerusalem Jews, devout men from every nation under heaven. And at this sound the multitude came together, and they were bewildered, because each one was hearing them speak in his own language. And they were amazed and astonished, saying, “Are not all these who are speaking Galileans? And how is it that we hear, each of us in his own native language?”

God allowed them and gave them the ability to speak the tongues (languages) of foreigners so that they could communicate the truth of the Gospel in the people’s heart language. With my heart being to plant churches in the Czech Language these words in Acts 2 move me. I long to be able to preach in the heart language of Czechs. Please pray that God would show me favor and maybe just maybe for an Acts 2 experience! Thanks for being in the fight with me!

Don’t forget about tonight if you are in Southern Wisconsin or Northern Illinois. We are having a Going Away Party tonight, Wednesday the 29th, from 6-8:30 pm at Sunset Park in Elkhorn, WI. Click HERE to get directions to the Park, we will be in the Lion’s Den pavilion. Come on out, eat some food (brats, burgers & cake), say “HI”, say “Bye” and bring some friends who might be interested in partnering with US to reach Prague, the Czech Rep. and Europe!


View Larger Map
Have you thought about supporting me?
Consider Giving

…THAT I DO HAVE FUN OUT THERE! I’ve never been short on intensity and … END_OF_DOCUMENT_TOKEN_TO_BE_REPLACED

“But seek the welfare of the city where I have sent you into exile, and … END_OF_DOCUMENT_TOKEN_TO_BE_REPLACED

Today was supposed to be our KICKOFF GAME.  Instead of coaching, I … END_OF_DOCUMENT_TOKEN_TO_BE_REPLACED