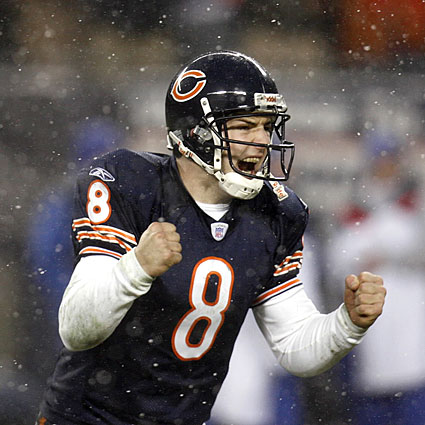 “What?” you ask. The very true fact that my Bears are going to the Super Bowl! It took quite some time for it to even begin to set in! The reason being because for the last 21 years there hasn’t been a ton to cheer about and it seems like as a Bears’ fan I’m naturally a pessimist after rooting for the team for last 27 years, pretty much since I emerged from the womb!


But it has begun to set in and I’m excited! One of the reasons of my excitement, beyond the obvious, is that the two coaches are African-American and even more so they are Christians! That’s right Tony and Lovie love Jesus and they aren’t afraid to give Him shout outs! I’ve already read a couple articles in the national media acknowledging their character, and moreover their faith in Christ! This is one of the reasons I serve with AIA, so that athletes and coaches are using their platform to talk about something more valuable than Super Bowl Trophies and rings and this and that! But they use it to communicate what really matters – Jesus! But I’ll be real, it would be nice for Chicago to have a Super Bowl Trophy too! I just had to get that in there! Here is a great quote from Michael Smith over at ESPN, click here for the whole article.

Dungy and Smith are Christian men who serve the Lord first and spend nearly as much time serving their communities. Doesn’t prevent them from winning. And often. In just three seasons Smith, last season’s Coach of the Year, has helped build the Bears into a league power. Dungy has won more regular season games than any coach since 1999. Where does color factor into that?

After they won their conference championships, you heard Smith talk about his “being blessed” and Dungy give thanks to God. That isn’t just lip service with these guys. As Christians they believe it is their responsibility to let their light shine whenever they’re in the spotlight. Just as they have a game plan for each other come Super Bowl Sunday, both plan to use the global platform that the Super Bowl provides to speak words that could make an impact beyond football. At his oldest son James’ funeral last year, Dungy used the eulogy as an opportunity to teach lessons about manhood and fatherhood.

…THAT I DO HAVE FUN OUT THERE! I’ve never been short on intensity and … END_OF_DOCUMENT_TOKEN_TO_BE_REPLACED

“But seek the welfare of the city where I have sent you into exile, and … END_OF_DOCUMENT_TOKEN_TO_BE_REPLACED

Today was supposed to be our KICKOFF GAME.  Instead of coaching, I … END_OF_DOCUMENT_TOKEN_TO_BE_REPLACED