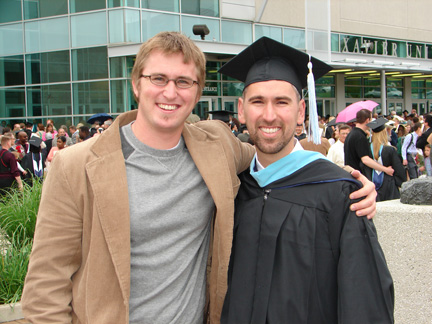 Yesterday was yet another day of spending a lot of time in my car. I have become accustomed to driving in my car multiple hours by myself. I joke around that I am developing a slight case of schizophrenia, that way when I drive all these hours by myself Iâ€™m not lonely. But all joking aside I have had some very rich moments between me and Jesus as I have been on the interstates of America since I have been back. Yesterday I had one of those moments! See when I know I have to drive I fill up my old school 20 gigabyte iPod with as many great podcasts that I can! So I have hours and hours of solid podcasts, mostly sermons, that I can delight in. Yesterday, I listened to Erwin McManusâ€™ series, entitled Chasing Daylight, which happens to be the same title of a book of his. (Check out Mosaicâ€™s podcast page) It rocked me. The section of Scripture that he was preaching from was 1 Samuel 14:1-23, which is about Jonathan, the son of the king, and his armor bearer, who is some punk kid thatâ€™s purpose was to carry armor (glamorous position?), going up to the camp of the Philistines, the enemies of the Israelites, and picking a fight. Here are some highlights of the passage:

I encourage you to look at the whole passage, because I didnâ€™t want to put the whole 23 verses up here. Erwin made some great points about Jonathan taking the initiative, then stepping up to the plate, and trusting God to show up. But what struck me was the actual story in correlation to my life.

See I am the punk kid carrying the armor, to a degree of course. Over a week ago I said goodbye to Billy (see picture above of Billy and I at his graduation from Xavier), my director with Athletes in Action in the Czech Republic. Billy and his family have been back in the States on furlough the last year, while Billy worked on his masters and worked in the Sports Ethics Department with AIA. Billy, Adrianne, Abigail, and Levi are heading back to Czech soon and with that I have felt the weight of them leaving. See in many ways I see how Billy is Jonathan and I am the punk kid armor bearer that is following him into battle. The battle looks a little different than Jonathanâ€™s and his armor bearerâ€™s, but the similarities are there.

These two men that climbed the rocky cliffs to pick a fight with the Philistines were up against numbers that would have seemed impossible for them to actually succeed, but that didnâ€™t stop them. Jonathanâ€™s heart was captured and he was convinced that God would show up in some way and his words inspired his young armor bearer to join him. This is Billy and me.

A little over a year ago, Billy and I sat down at Bohemia Bagels and had a discussion. It was much longer than Jonathan and his armor bearerâ€™s but it was along the same lines. Billy and I talked about where he saw us, as an Athletes in Action movement, going and he looked me in the eye and said, â€œI believe you part of this and I can see how God has made you to fit in it.â€ I could only respond as the young armor bearer did, “Do all that is in your heart. Do as you wish. Behold, I am with you heart and soul.”

But that day isnâ€™t here yet. I look forward to it! The day when Billy and I will climb that cliff, that is the Czech Republic, and trust God to do something that to everyone else looks impossible. See what you learn if you look at the story of Jonathan and his armor bearer is that Israel was in a hopeless situation, they were outnumbered and it appeared that it was over. Saul, the king and Jonathanâ€™s father, was just sitting under a tree almost waiting for the inevitable to come, but not Jonathan.

One could easily do the same thing when it comes to Czech and the fact that not many Czechs know Jesus. But like Jonathan, Billy believes and I have been called to follow Billy up that cliff and trust God to bring victory in the midst of a country of 90% atheists. Please be praying for Billy and Adrianne as the get ready to fly back. Pray that the Lord would prepare their hearts and that as they return they will see a new season of fruit and Czechs lives being changed. Please also pray that God would extend them much grace as they are moving and traveling with a 3 year old and a two year old. Billy, Adrianne, Abigail and Levi I love you four and I canâ€™t wait until the Lord will reunite us back in Prague! You are in my prayers!

…THAT I DO HAVE FUN OUT THERE! I’ve never been short on intensity and … END_OF_DOCUMENT_TOKEN_TO_BE_REPLACED

“But seek the welfare of the city where I have sent you into exile, and … END_OF_DOCUMENT_TOKEN_TO_BE_REPLACED

Today was supposed to be our KICKOFF GAME.  Instead of coaching, I … END_OF_DOCUMENT_TOKEN_TO_BE_REPLACED